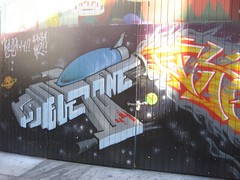 It’s hard to write about one’s urge to make graffiti and do it in a non-incriminating manner. So what the hell; I won’t.

It calls to me. I have a roll of sticker labels, and a neighborhood crawling with/calling for graffiti. Funny story, there. Lynae tells me this: there’s a guy, one guy, who, after getting off his work in the afternoon, drives around the Mission noting all the graffiti he sees. He then gives his list to a Graffiti Task Force Officer (or whatever they’re called), whom I shall henceforth refer to as GTFO. This GTFO takes the list, looks up each property owner, and tapes up the neighborhood equivalent of a Cease and Desist letter to their building. The guy who drives around has gotten so popular there’s even graffiti of him (pictured at right). 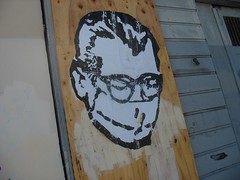 Here’s another funny thing: the definition of graffiti, as stated on the GTFO letter, is that it’s non-consensual. Without consent of the property owner, that which is painted, affixed, engraved, assembled, or sautéed in garlic butter with minced figs and within the public viewpoint is considered graffiti. It then becomes the responsibility of the property owner to get rid of it within 30 days. Here’s an odd observation, property owners: why not just say yes? If graffiti is stuff on your stuff without permission, give permission for your stuff. No more paint to buy—and no more frustration when the damned things got more scrawl on it the next morning. I’m just saying.

I’m just saying that if more stuff starts showing up that actually comments on the existing graffiti, don’t be surprised. If you’re not part of the problem you’re part of the solution. Or something.

By the way, anybody besides my dad even notice that I haven’t really come close to my goal of 25,000 words this month? Anyone?

2 replies on “These Are the Graffiti in My Neighborhood”

Someone painted an angry banana on our building and the GTFO had the nerve to ask me to paint it over. Assholes. I would rather have the banana.