Sure, they’re in Marin. That’s kind of a strike against them from the perspective of a cool young San Franciscan irked by Bridge-and-Tunnel infiltration into my own neighborhood, like Medjool. But what the hell, if they’re invading I might as well invade them back. No hard feelings.

It’s not so far a drive. You go through a little gorge and then a littler tunnel, a ONE WAY tunnel which has a 5-minute wait (or so the sign says… more like three, so hold your horns). Then you emerge into the oddest micro-community this this side of the Golden Gate. Well, the oddest I can dredge from recent memory anyways. Deers rest on front lawns, children’s swings hang from ancient branches, and all the houses are identical military-issue shape, size, and color. Past that you will of course miss your turnoff down McCollough Road to do the scenic route and end up at the Visitor’s Center. Nice place, but not sure I’d wanna live there. It was here I realized they’d converted an old Army church; I’d been here before, in this exact same building. But when I was in it before it was on old Fort Ord, and it was totally abandoned. Can’t say which I liked more. Like the idea, though.

Then we got on with the part we came for… back down McCollough Road and onward to some awesome views and more old things. Views were good. Old things coulda been better. Open ’em up, people! They’re not as dangerous as the building inspectors tell you they are. It’s just a little rust. And a little shrapnel. Unexploded ordinance? Is there unexploded ordinance? You might wanna take care of that. I hear there’s a couple leftover nuclear missile silos somewhere around here, and that’s acceptable. Just chuck all the bad stuff in there and light the whole thing. Or, at the very least, let grownups like me sign a waiver or something saying “I promise not to sue the National Park Service if I can’t find my left arm after exploring your park, etc. etc.” I can deal with that. It’s an annoyance having everything… well, most everything locked up. Didja know that the trail to Point Bonita lighthouse is closed a lotta the time? Yup. Big sign saying “Trail Closed” and a wide open trail just beyond it. Doesn’t matter. There’s more stuff to see.

Like the Marin Headlands hostel! Woo! I didn’t really see it; I just drove by. It looks lovely though. There’s lots of deer, of which there are lots. No, seriously—they outnumber you. Do not anger them, for they are legion. Hanging around bends and cliffs in some places are a couple lovely picnic areas overlooking a cornucopia of San Francisco skyline. However, the beach was calling. Moreso, sunset was calling since we didn’t actually drive in until after 1:00pm. Nice beach, not crowded but well-endowed with beachgoers, plenty of parking and plenty clean. Can’t really say as we didn’t go out as far as Bird Island. Did you know that birds poop there? Well they do. And I suppose they’d make for some pretty good pictures, but I was too busy taking pictures of someone trying to do cartwheels in the fine sand:

The Best Worst Cartwheel Ever from Orin Zebest on Vimeo.

Then I made a zen garden: 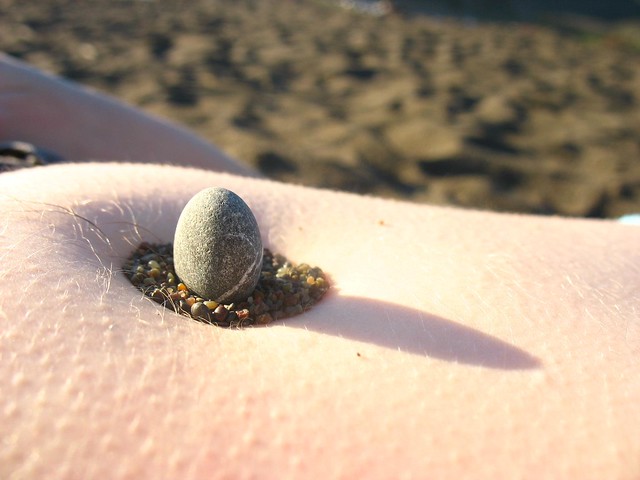 It was a nice day. A nice anniversi-day. Yes, today marks one year that I’ve known Ms. Lynae Straw, lady-friend of mine. Maybe talk about that later.

One reply on “A Review of the Marin Headlands”