Hair color, especially non-natural shades (like blue), has a certain effect on people that’s quite enjoyable, for me in particular—and so it’s totally worth it. Explanation.

Hair, hair like mine, seems to always be a subject people want to talk about. Don’t ask me why. I’m not a hair freak. It could be said, and has, that I am a hairy freak (but that is an altogether different subject). My roommate is a hairdresser. Sometimes, my roommate likes to ramble about my hair. How manageable it is, how no matter the length it seems to keep a definite shape, how thick it is despite my lack of a rigorous conditioning routine. It’s wavy. I never knew it was wavy until I grew it out as a teenager. This is, apparently, fascinating. Not just to her, but to everyone who wants to talk about my hair. Exposition.

Many ask why I did it. And this I say to them: I wanted to do it before I died. I’d never done it before. I think blue’s a good color on me. I was tired of looking the same. Brown wasn’t really my style. People thought I was weirder than I appeared and so I decided to run with the stereotype. San Francisco demands that if you live there, you have some sorta self-evident self-expression on your-self. That’s all. To be fair, about two people have asked. Reasoning.

I really like finding out people’s reactions. See, in my entire life I’ve never done anything to my hair more than pull it back with a hairband when it was long and I looked like Jesus. Sometimes, summers of my youth, my hair would lighten in the sun. Just the very tips of the front. Other than that, a pan-European brown is what I’ve lived with since before I can remember. My family is surprisingly cool with the bluish-greenish welter that is my head. I guess they were expecting something like this since I was a teenager. Late bloomer, I suppose. The reaction from strangers has been even better… Development.

“Like the hair.”
“Oh, thanks. My girlfriend did it. By putting my head in the toilet.”
“Man, that’s a great color. Matches the shirt.”
“Oh yeah! I knew there was a reason I wore clothes today.”
“Whoa dude, your hair is BLUE!”
“Oh my great… When did that… it must have been that Gypsy I cut off in traffic the other day!”
Examples.

(Note: I have never, nor will I ever, cut off a Gypsy. Not only because I admire their culture, music, and people, but also because that’s just a bad idea and if they wanted to those people could curse your ass for good and you’d have to rescue an orphan with HIVs from a burning building that also served as a detention center during WWII or something. Parenthetical statement.) 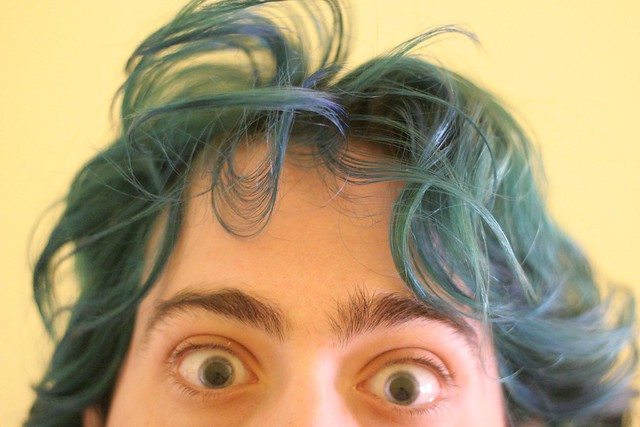 Also, Dude, Gypsy is not the preferred nomenclature. Romany, please.

How bout some pictures?

Yes, your blue hair is a delightful digression from the norm…but we never expect anything but outside the box from our dear Bob – come to kind of expect it, ya know – and the blue does bring out the sparkle in your eyes! I think the first time I dyed my hair was when I was 28 – it was burgundy…and lovely…