Like I told the bagpipe bandleader, none of us are really sure how to commemorate the life of a website. Part of that is because, hey, a website isn’t really alive. So it’s a difficult question. How do you remember?

I remember when I wrote about it. There was such beautiful harmony in this clever system of giving people thumbs-up and earning points for photo contests and answering ridiculous yet thought-provoking questions. I’ve long had an affinity for non-binding imaginary point systems, that fact is known to many.

It was sad when I heard that it would be going offline. 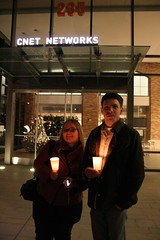 I had a spree-day contacting people I’d met on there once or twice, people I liked but never really kept in touch with. Does anyone reading this remember when Flickr used to be mostly just bloggers with cool pictures they wanted to host? Every photo had an interesting reason to be there; you had to portion out which photos you uploaded cause you only had 20mbs a month to work with. So you only only put up the best ones. Either that, or you shilled out the $60 to become… pro. Lots of websites go through that high-quality early-adopter content-building phase. Consumating never had a chance to outgrow that magical period, and I’m bittersweetly thankful. I sound silly enough waxing about Flickr.

So I’ll just remember it how it always was: silly; playful; packed with interesting people, far too interesting; a perfectly crafted time-waster; the spirit of an age. Not bad for a site that started life as joke personals ads.