Quite unexpectedly, there is a laptop in lap. First, a short story; after that, a short mission. 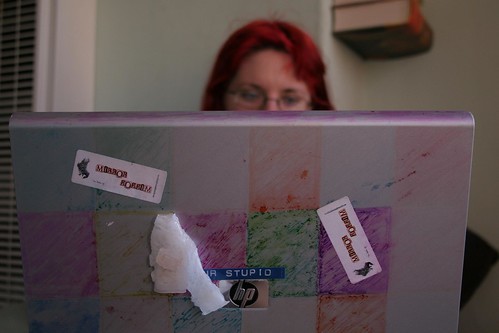 My girlfriend’s laptop sucks. For many months, a sticker that reads UR STUPID has presided just above the little embossed HP logo on the front. It has performed to expectations admirably. It’s noisy, it runs too hot and then freezes up, and it’s got some unidentified white material melded in places (no, not the Nik’l Nips you see pictured to the right, a different odd white material). All this until a few weeks ago, when I disassembled the dern thing and managed to clean out the hairball of dust-clog lodged in the gills of the heatsink. If that made no sense to you, don’t worry—suffice to say that I fixed the noise and overheating. Of course, I hadn’t counted on somehow creating a worrisome problem whereby the computer runs normally for minutes or hours or days, but then without warning shuts off entirely. No warning. Entirely. Needless to say this was distressing for the female involved and she decided that she’d spent enough years trying to get it to run properly. That’s why she’s got a brand-new Lenovo. Yup, brand-new. That’s why that particular “girlfriend’s laptop” I was just talking about—it no longer exists.

Instead, it is now boyfriend’s laptop. Yes, after a thorough disassembly, and soldering some suspicious components, including an motherboard battery knocked loose from its moorings, the computing P.O.S. seems to be much less “S.” So yeah. Laptop. I have it. Wow, what an interesting story. Mainly I just wanted to tell it so that everyone understands that this was totally not my plan, I take no responsibility for my good fortune, and I am an oft-resourceful compu-person.

Part two, fun part: the challenge for you. The laptop has doodles all over it, girly colored sharpie squares that have worn away and make it look like the laptop of an indulgent Lisa Frank fan. This is unacceptable. I’ve decided to use my my own means to cover the thing in words. I’ve always liked words. I would like some things to say. Inspired by #2, “crowdsource the name of your new unicycle” on this list of 5ives…