Today I’ve been three months out of Australia. Three months, being back in the U.S. without a job, or really any well-conceived plan, or a pointed direction to go. And I’ll tell you why that time period is so special as opposed to 2 months or just 1 or a single rotation of Neptune: 3 months is the limit of an Australian tourist visa. The one I never got. In other words, there’s a different reality out there where I came home today. I flew in to LAX about 10:30 this morning with a lot more knick-knacky crap and probably more money. 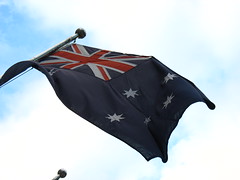 Because I can place that as my one mistake during my Australian travels. Well, no… there was a lot of mistakes, a litany of shame mostly involving stupid things I said or did around pretty girls, but none I truly regret save for that one. I didn’t make any damn money! 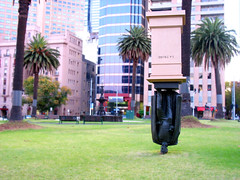 I looked for a job there the entire first month of February, which in itself is worrisome since us dumb yanks only get a four-month working visa (warning sign #1). At the end of February I accepted the one job that never asked for a resumé (warning sign #2). It was a sales job mostly for “backpackers,” youth from abroad working their way through their travels. Which was me. Stop me if you’ve heard this one before: hire a bunch of cheap foreign workers who aren’t too familiar with local labor regulations but are transient anyways and usually desperate enough that they’ll work long hours and go anywhere at the drop of a hat. Yeesh. My situation might not’ve been “migrant Mexicans farmworkers in a Steinbeck novel,” but man, having Cesar Chavez over my shoulder woulda been nice sometimes. Which is the last I’ll say about that. 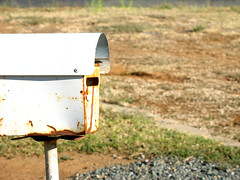 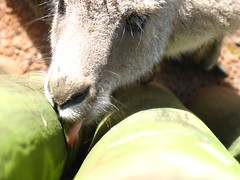 My Dad says never accept anything that eats as a gift. It’s a good rule; saves a lot of explaining as to why you must turn down an actual, hooved, barn-rental-required gift horse. My newly-minted cosmic rule is “never work really hard at a job at which you don’t earn at least minimum wage.” Simple enough, and kind of stupid I should have to spell it out. 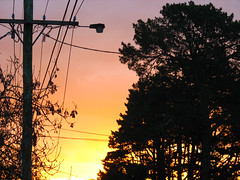 So why did I stay so long earning peanuts and a thick skin from all the Yank-haters? Stubborn hope and plain old stubborness. Fear of what was else was out there. Camraderie and commiseration. A deeply felt and somewhat misguided feeling that applying myself to the task was helping my personal developmont. Free travel even if it was only to the suburbs. Josephine (she prefers Jo) who lives in a pretty old house on Livingstone Road in Eltham, VIC, who has a garden made from old metal scraps, who fed me crisps and told me about the war, generally made me feel like a grandson, and whom I genuinely helped with power bills. There were a lot of good, or at least excusable reasons for staying so long. But I’m just not a good salesmen. Couldn’t tell you why. Either that or Aussies don’t trust Yanks. And I could’t blame them either. 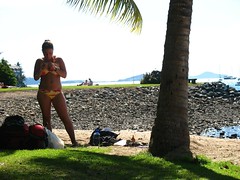 Bottom line: I quit after two months and the only thing that kept me from boarding a plane come May 1st was $2000 of borrowed money and a couple weeks left on a lease. I went to Brisbane, the Great Barrier Reef, and stayed in Airlie Beach (the best beach town ever), all in two weeks. I had a two-week “vacation” before my plane (the one I was really on) left June 7th. Do I regret taking that job? Duh. I have a friend who’s personal motto is: “No regrets, ever; you can’t live it over again.” Which is a fine motto to have. But the way I see it, you can and do live it over again. All the time. With everything.

And today, whenever I an reminded how different I see things and how I act and how better I am understanding everyday persuation, I can put a price tag on it. Which fortunately or unfortunately is all the time. Sales is a tough job, but what’s tougher is talking to strangers. I still haven’t mastered it. But damn if I didn’t get an expensive push.

One reply on “Three Months None the Wiser”

I couldn’t agree more with your friend – no regrets; you never live it over again – but you can do it differently. What would you change? If you changed it, wouldn’t it change the experience and how you reflected on it? Everything is learning – and the people you met – well they will always be a memory of the experience, probably the most powerful part of the trip.

And FORGET about the price tag!!! Some things don’t have a price. Just be thankful.