How many tabs do you have open? No, go check now.

How many of those are things that you’re going to read? Blogs, Wikipedia articles, things linked from friends, searches for places or people or events you heard about somewhere, information of every thinkable sort. There’s a lot of it to be had. When tabbed web browsing was first introduced in the MultiZilla extension for Mozilla browsers in April of 2001, the 21st-century web browser—both the program and the person using it—came of age. A web program that can only view a single website in a single window at a time is ideal for modem connections, who can’t handle much else. Well, tabbed browsing evolved for everyone with something better. Even Microsoft eventually figured that one out (right now we’re all glaring at you, IE7 users). I blame the epidemic of neglected tabs and… well, neglected tasks in this country on these developments. There’s now too much information out there for us to handle with ease. In the interests of full disclosure, I am very familiar with this tab/information overload. I suppose that’s why LifeHacker evolved.

Recently I stopped doing some of these things. Well, I stopped doing them for isolated 30-60 minute periods during my day. There’s a thing I discovered called I-Doser that I started experimenting with, and it’s a stimulating break from much of the stimulation. It’s based on binaural beats that are designed to affect the mind, so that you’re on drugs. Pretty much. You know, drugs? I’ve had some experience in the past working with binaural beats, starting with CoolEdit in 1998 and then Brainwave Generator in 2003. For those who don’t care about those last two factoids, they weren’t for you… they were to prove my cred to those in the know. To those not in the know, allow me to explain why this whole thing isn’t as stupid as it sounds. 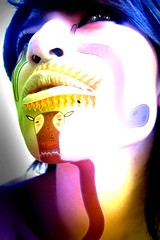 It’s based on our lovely hominid brain structure. Two sides of the brain, each synced with the other; two sides receiving signals from the different sides of the body. They sync up with each other at regular intervals, depending on what state you’re in and how active your brain is. Solving math problems is Beta, pretty high at maybe 30-40 cycles/second. Normal operation might be between 15&20 Hertz. A light siesta would be Alpha about 11-8 Hz, and then—my favorite—Theta, where dreams and daydreams happen, ideally about 6-3.5 Hz, where the world slows down and external awareness nearly drops away. Then of course there’s Gamma, where external awareness does drop away and people like me tend to snore. It happens. The odd thing is that at any given time we have an eternally variable state, where all four co-exist. The brain’s internal communication is itself communicating on different levels. Weird that such a thing needs to be, no?

But back to the drugs, anyways. The idea behind brainwaves is simple and that is that if you can stimulate only one side of the brain (by stimulating one side of the body—like one ear, one eye) and signal the left and right at a specific pulse, eventually the brain can sync up and replicate the pulse. 6Hz dreamstate? Voilà, an enchanting 6Hz pattern. I-Doser takes this notion up a conceptual notch and presumes “well, if you could read a brain and see what kind of state it’s in, and then replicate that, couldn’t you essentially copy that state/mood/outlook/disposition from one brain to another? Well, let’s try it! And then sort-of maybe market it to teenagers as a substitute for recreational drugs.” 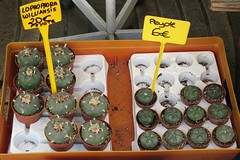 That last little bit is my own personal “disposition” on account of what I think of some of the descriptions on their webstore. Sure, I tried Peyote. I liked it. I maybe got some pleasant visuals and felt a bit out of it for the next hour, but possibly nothing that couldn’t be accomplished by a dose of lying quietly awake but with eyes closed, thinking intently of what kind of experience I was having. Who’s to say? Ultimately, that’s the reason this sort of thing is legal (and is going to stay legal, for the foreseeable future), is that the brain has a choice. You aren’t hypnotized, although it’s a little like it… one cannot make a hypnotized person do anything they have a moral objection to, nor to put themselves in bodily harm. Once something, like, say, Cocaine is inside you, your body pretty much has to deal with it till it’s processed. If I wanted to, I could take off the headphones any time. Or the browser too. Really.

Sometimes I just don’t want to.

photo credit to Inju, casamanita and Drunken Monkey on Flickr