Setting is some low-slung community living/art space that feels like a janky maze — almost a stock location for me. I notice there’s some high-ranking politician here on an official visit, along with his security. I don’t even think about it; I immediately navigate a back route. There room he’s in was made from a shipping container box, with a wall of various switches near the unguarded rear door where I emerge. I walk directly past a secret service guard without him even having time to get off his phone call.

I take an Orc-lord up on a standing offer. Given a nominal fee, I am allowed to eat any orc from the Orc-band I choose. Several distinct and varied orcs line up for me by height. The catch is that the orc I choose won’t just sacrifice itself, it will fight me — but if I win, eating it’s fair game. The trick then is to choose the right size orc. I stand in front of them one-by-one.

Walking through my neighborhood here in the Mission, the streets near Cesar Chavez are like a calm colorful French Quarter. Despite having passed by it many times over the years today I stumble upon one of my projects from long ago: a point-and-shoot camera mounted on curb. It’s remarkable that it’s still there considering I installed it in… 2013? People can take whatever photos they want, then retreive them or give them to others. Some are given a surf background — now faded to a dingy grey.

This record is weird and you’ll probably like it. Before I say anything else, I’ll give you the opportunity to trust my words and just go download it. I’ve long been an advocate of knowing nearly nothing about a song or album before listening to it so as not to sully the innate purity of one’s judgment. It saves you the trouble of being seduced by the idea of some kind of music only to later realize that, hey, this Brent Spiner album really sucks. But — since if I’m going to bother sharing some music I really ought to explain why — I’ll go ahead and give an idea of what “Silicon Valley,” by Raven Kane and Klaus Netzle, is like.

There’s no way you could find a record quite like this. It isn’t much like anything I’ve heard, although one can easily place it in the 1980s epoch. For me, the best thing about it has got to be the earnest, catchy, often absurd lyrics — with topics such as office equipment, video technology, and artificial intelligence. It’s very firmly in Neo-Luddite on all these issues. You will, in the course of listening, encounter a joyful cognitive dissonance if you ponder how many electronic instruments are used (although, to be fair, the album’s subject is enhanced by all those clicks and boops). Even though the electronics are a campy marvel of the 80s aesthetic, the lyrics are incredible. As an example, I’ve transcribed the lyrics of one of my favorites: 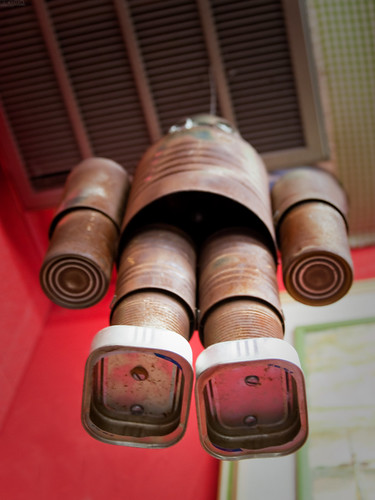 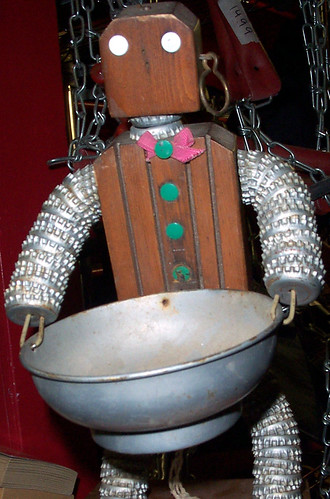 Man, it is fun to sing. I hope this doesn’t spoil it. I was actually hoping to do more research on this album before publishing, but guess what? There isn’t that much actual information on this record. I can’t find out why these two collaborated, what they were trying to accomplish, or what the reception was. I know that I’m  happy to have found it. I know that it’s good to keep it alive. And I’m happy to help others find it, too. With no further ado, click these two techno-prophets for a Sharebee link:

I think I have good taste. In epic thrift store excavations, I’ve gone through hundreds of used records—probably thousands. More than I wanna think about it. There are a lot of bad ones. Mostly, one hopes that one may find something funny to share with one’s friends. Old stuff is weird (admit it). But oh, there are some gems, and usually they don’t fall out of the cracked wooden bin and yell “I’m worth buying off Ebay for $50! Here I am for ¢50!” It takes a trained eye to efficiently sift through the absolute junk at most places. 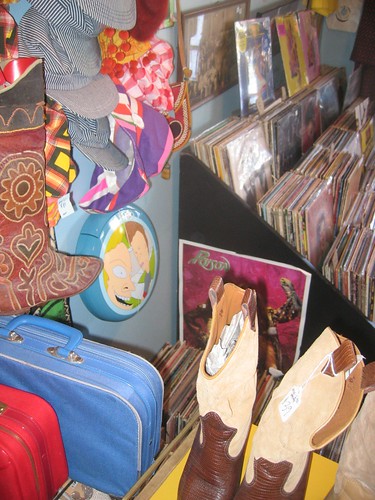 Or a trained ear. Finding an incredible record has a lot to do with knowing what you like in the first place—although for those wanting to take up the hobby, it’s perfectly reasonable to make it up as you go along. A good place to start? By all means, judge by their covers. Me, I happen to know that I like gypsy music. I pick up many records simply because they contain in their titles one of these: Gypsy, Roma, klezmer, or Bulgaria. In general I also recommend looking out for: home recording, demonstration, spectacular, incredible, “_____ and the [word intensifier]s,” Moog, olde tyme, fart, and dinosaur. It’s a wide net, a rough algorithm, but it get’s results.

Which is what brings me back to “gem.” I got one. I wasn’t able to actually play it until I found a new record player on the street (thank you, city of cannibals). Even after I discovered its magnificence I didn’t pick up the phone on the ol’ Share-The-Love hotline until a roommate suggested it. And then I had to fiddle with knobs and buttons and wires and other esoteric equipment, only to discover that no matter what I did, the digital transfers just didn’t measure up to my high standards. I’m a wizard with audio software… but there’s no way to get pristine audio from salvaged parts. Get what you pay for, I guess.

But wait, what was this musical masterpiece, I hear you say? Let’s listen to the first track:

Even through my peasant’s needle, you can hear the tambourine sparkle… the horns shimmer… the tubas thump… the piano tinkle… the flutes shriek. It’s exciting! It’s powerful! We’ve heard this song before, but not like this. Easy listening and exotica both seem to apply, but can’t measure the appeal of the real nifty fifties, big bang band, swank-ocracy. Mostly the album is made up of low-key low-tempo stuff, soothing music that might be played without irony on KWXY, which might very well bore you. The poppy ones sure do pop though. On all of them, the arrangement is top-notch and the production values are beyond reproach.

This makes sense considering that the arranger was none other than Hugo Winterhalter, musical director at RCA for more than a decade. This album is dated 1960. For the time, I’m sure, it was somewhat standard. It’s a formula: take a bunch of songs people know, ones that you can tie together with a theme, write them for ensemble, make it modern and “now!”; you have yourself an easy sell. It’s a formula, and it worked. Still does.

Some say stuff like this is more craftsmanship that artistry. It’s the carpenter’s work, not the sculptor’s. I had a music teacher who made the same comparison between Bach and Mozart. He said that while Mozart was a genius, transcended forms and gave the world beautiful music heard neither before nor since (etc., etc.), Bach was simply working within established convention—and when you wanted a fugue, he made the best. They were differently brilliant. Both men became immortal through their music. If you’re like me, though, you have to respect Bach a little bit more. It’s a clever mind that can conjure immortality working with someone else’s rules. I’m thinking that Mr. Winterhalter was a Bach fan.

Now I’m getting a little antsy thinking about how poor my equipment is, and how enjoyable some of the actual songs are, and how there’s hardly any CDs of Winterhalter available, and how it might be up to me to handle this guy’s continued existence. Then I remember the long tail, realize I’ve been praising the guy for seven paragraphs, and things are probably gonna be ok. I’m hesitant about uploading the good stuff (hand-restored LAME V2 mp3s) because I understand perfection, and I understand pragmatism, and I understand that they aren’t the best of friends. Let it be known across the land that I sadly consider these songs as “orphan works,” and hereby claim stewardship of them until someone better steps up. For goodness’ sake, even if you have a better record player step up. Here are the songs from “Hugo Winterhalter Goes… Gypsy!” that will thank you if you do:

Without further ado, I give you the imperfect recording of my favorite thrift store record in the past year: 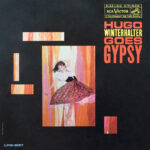 I present, for the first time ever, something of perhaps moderate interest to someone else: a vintage audio recording.

I got this record at a thrift store called City of Hope. It drew my attention for a few reasons… Firstly, t’was fershure self-released: heavy non-vinyl, one-sided, lacking cover art, copyright, and most exterior features (which you can see below). Secondly, the name itself is somewhat intriguing — “Yvan Merineau – Fan Dance”. And, this was key, it smelled old. Most people would neglect this. But as I’m sitting here now I can still smell old people’s garage, the back of a wooden cabinet, wilted paper and cardboard crumble(s), maybe even factory-sealed plastic. I bought it, for $1.50.

I have to thank Show and Tell Music and their remarkable and entertaining collection of discount-bin record covers, for first making me aware of these self-produced albums. No-frills cover art is below: 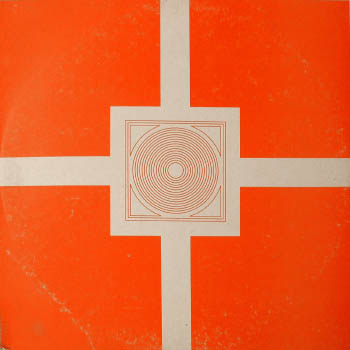 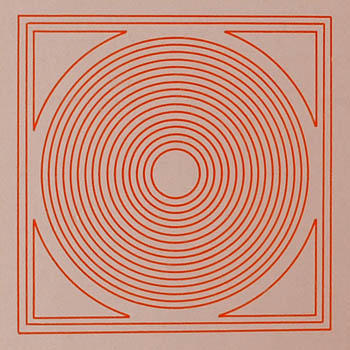 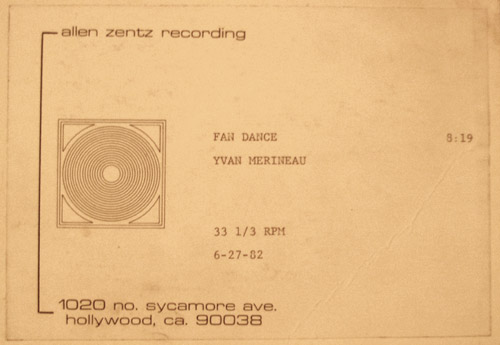 All told there is only one track. It’s a layered synthesizer arrangement that seems intentionally off-rhythm at times, and other times just recorded badly (side note: 1020 N. Sycamore is still there, and is still a studio). But I didn’t buy the music for it’s sound quality; I bought it for it’s novel quality. Not to say I didn’t clean it up, though. I’m not a barbarian.

I’ve taken my share of music from the internet; it’s time to give back. And so I give to you, the people: