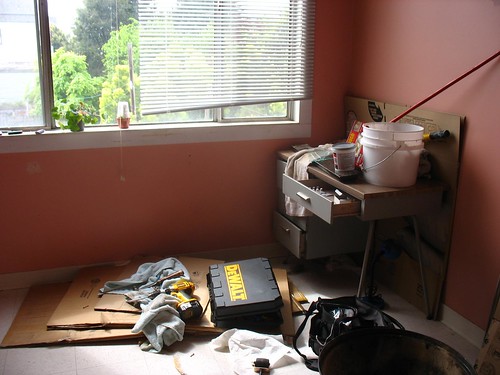 There’s a room in my house that smells like abandoned building. I know this, because I’ve been in many, many abandoned buildings. For the past few days San Francisco has had (while not quite “Biblical” as described by some) torrential rains, and the normally warmer drier Mission has seen as much as the rest of town. And I love my apartment; my neighborhood is great despite some evidence to the contrary.

It’s just that the place is a bit of an old girl, you know. She does the job… the job of being inhabited… just, sometimes she shows her age is all. One room at the back of the apartment I call the “project room” (pictured, to the left) despite the fact that no “projects” to speak of have been completed there. We just called it that when we moved in. Besides, it’s easier than calling it the “sitting slash storage slash plant slash kiln room.” It’s actually one of our cooler rooms and used to be outdoors in fact, which is why it has two windows looking in on it from other rooms of the house (err apartment—a personal history of single-family home residency is apparent in my mental constructs). 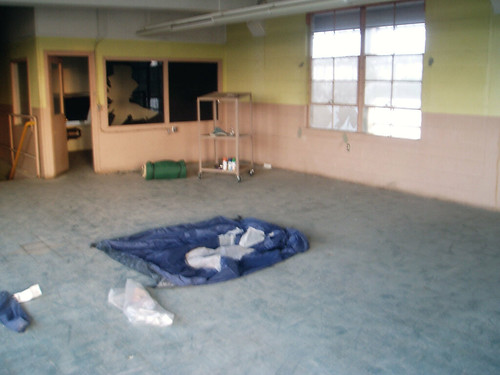 It also doesn’t really hold in warmth too well which makes it not-too-handy for sitting in seats as far as “sitting room” goes, but which is pretty handy when Lynae’s kiln hits the 2400 Fahrenheit mark. Except of course when it rains and water starts coming in under the door, which doesn’t fit because it’s swelled up in the rain.  And as far as the rain goes it doesn’t stop at the door. The roof hasn’t started leaking… yet; however, one gets an inkling of why I might notice a little aroma of dilapidation. I think you kind of get the picture here: the room is neat for its uniqueness and its feeling of history, but has its disadvantages as concerns actually taking care of the place.

Well, I did want to live in an abandoned building once. I guess we ought to be careful what we wish for.