Look at you, in your little green tutu with the pink trim. I see you’re co-ordinated with the tights. And with the pink and green foofura tufts around the shade structures, even. Who just keeps neon green fishnets lying around the house, nowadays? You do. Great getup… although it doesn’t really match the wig. That is a wig, I hope? The dark sunglasses bring everything together and remind me that, hey, you have facial hairyou have facial hair. Your girlfriend’s pretty hot too. 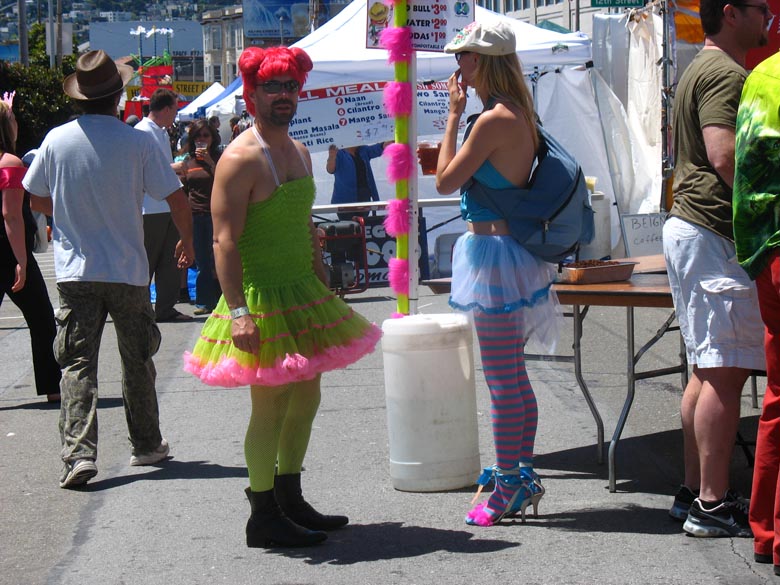 I went to the How Weird Street Fair along Howard street, here in San Francisco. A very San Francisco event. Midday not many people were there, but the later I stayed the more teeming and freaky and hot it became. When I say hot, I mean summertime-hot, unforeseen unseasonably early-May hot, hojeez I think my sunburn matches my red shirt hot. Lots of people-watching, loads of dancing, more loud music than you could shake the ground at. It’s like a preview of Burning Man without the water rationing. I didn’t dance—a reasonable fear of overheating. Perhaps also an unreasonable fear that dancing would annoy more than amuse.

Heard there was talk of shutting it down, before. I left earlier in the day, around three, and missed some action. There’s a lot of talk now about shutting it down, after. I sure hope not. Seems about ten or fewer people on the street don’t like the noise it causes one Sunday a year. Despite the signed petition of around 100 residents, the city and police wanna be rid of it. Damned if I’m the first to say it—but that’s pretty weird.