I had no idea what to do this fourth. Maybe I was gonna dress up like a salmon and bother tourists (it seemed only fair). But instead, I just walked outside. I walked outside. And my neighborhood took care of it for me. You have no idea how much I love this town. 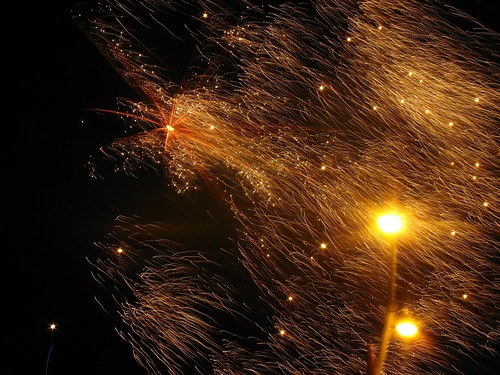 Directly outside there were people setting off the screamy ones that don’t leave a lot of smoke. Down the street I could see big ones. We got in the car and drove southwards, toward Bernal Hill. We figured we could get a nice wide view of the entire Mission (which, apparently, is a “hotbed” of illegal fireworks). Unfortunately some other damn fool had the bright idea to light off some of the same from that dry, grassy park at the top of a windy hill, and… well, we drove outta there pretty fast once we figured that out. Precita Park was cool. The little lady’s new camera got such a workout her batteries died. Someone blew up a garbage can. The SFFD showed up with a big spotlight but didn’t say anything to anyone, and all was understood. The projects down about Cesar Chavez and Harrison were lit up, streets closed off with stolen (borrowed) traffic cones, its intersection packed with people standing 200-300 feet directly below the wink-and-a-nod explosions, each family who wanted to celebrate taking turns which meant at least three separate finales… that I saw.

Did I mention I barbecued burgers on our backyard balcony? Cause I did and they were delicious. Just wanted to mention. Happy Fourth, San Francisco.