Idle in-brain conversations. Background noise that rambles on and sometimes if we’re lucky goes somewhere. I was sitting eating a burrito the other day. This noise went somewhere; what do yo think? 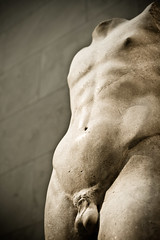 1st idea: Evolution. Selection. The world of man. A species’ environment determines which genes are favored. It determines what genes stick around. In humans, self-determined environment (society) is usually more important than the natural world. So there’s a feedback loop. People create their environment, which favors people who can better live in it, and have children who continue to live a life to which they are suited. A possible genetic tendency towards cultural aspects. Accelerated specialization. Patterns within a culture and the ensuing sexual selection might explain geographic racial features. How an individual deals with turmoil and struggle is tied with one’s spiritual beliefs. We can have a culture that shapes its gods a certain way, and people within it who adhere to those gods. Feedback. Some concept emerges somewhere, spreads through society, and favors those predisposed to it. Or it might find more fertile minds somewhere else, and the seeds will grow elsewhere. Memetics influencing genetics. For instance, Greece no longer is made of Greeks, but ethnic Turks. Yet in academia, a major in Classics might as well be called “European Studies.” Through the influence of ideas their values live on in a populace both inheriting them and built to inherit them. 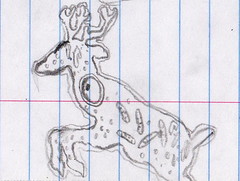 2nd idea: Predation. Digestion. Nature’s law. Organisms get better nutrition from sources closest to themselves. Carnivores spend less time eating than herbivores do, because it’s more work digesting plant fibers than animal protein. Go back far enough and all organisms are theoretically related. Life was just self-replicating bacteria. A few billion years later some became Eukaryotes, which are distinguished by their ability to eat other things (like bacteria). Everything that grew from them—animals, plants, fungi—inherited the capacity to derive sustenance from other life. The more alike, the easier that is.

3rd idea: I find those two ideas I just had quite interesting. I wonder if I can link them together. Let’s see.. they’re both centered around evolution and assimilation. Things diverge over countless years and then re-absorb quickly, converging like long-lost puddles. If they were puddles of oil and water they wouldn’t come together so easily. It’s about how easy it is. How easy it is to assimilate something is directly correlated to how similar it is. There’s my topic sentence.

Hm. That was interesting. Those idle thoughts led somewhere. Even if it turns out there’s an existing scientific theory that says about as much, it’s fun to derive these concepts myself. I do recommend trying it sometime.