It’s a great modern fallacy to think that not everyone is a futurist.

Please consider this: if you’re living and breathing, here on this earth, it’s fair to say you need to figure out where you’re sleeping tonight. And beyond that, you ought to know what your going to do for food and water, and what you’ll do for it tomorrow, right? Then the next day. Then the next. There’s mutual funds, 401Ks, mortgages, all the way through burial insurance—and if you have them, you have them on account that you think you know something about the future. If so, you’re a futurist—predicting the unpredictable for your own well-being. Nothing special. The people we might call “futurists” are just the ones who go a little further, who get a little creative, who think up the amazing stuff that makes things seem weird and different.

Futurists like the iPhone (those that think of such things). That new one coming out tomorrow I mean,the one with location-sensing GPS built into it. That’s a wishlist biggie. With an iPhone you can reasonably take the web’s mountain of available knowledge anywhere. Mohammad doesn’t need to go to the mountain; the mountain can come with him (in convenient molehill size). To follow the metaphor… if it shall come to him, the mountain must know where he is. That’s the location-sensing, location-aware internet: it comes to you. Near a grocery store, and one’s grocery list will pop up. Outside a restaurant, the restaurant reviews magically appear. We’re allowed to dream crazy dreams that might happen one day… picture something like network-enabled telepathy: normal people walking down the street, transmitting data of them walking down the street, to others walking just around the corner, and suddenly everybody can see around all the corners and we get something like a real-time GoogleMaps Street View. Techno-clairvoyance, it could be. Someday perhaps a new Transparency will replace the role of stodgy old button-up Security, light shining over dark forever and for good. These are things I have heard dreamt of.

Apparently, I’m the only futurist who rides public transit. It seems odd that few analysts seems to have analyzed thusly, but iPods have always seemed a little… alienating. The earbuds double as earplugs. Have you ever been privileged as captive audience to a stranger’s lengthy phone conversation? Perhaps chose to cloister yourself away from them and escape into your own idiosyncratic cinematic push-button music-video reality? No difference, you and them. You’re each off in your own little world. Personally, I know that if I got an iPhone I’d use it on the bus, I’d read blogs waiting in line, I’d Twitter my daily thought quotient till I’d overthunk it all. I would fill in every idle moment and be wholly absorbed (O, Little world! I claim thee as mine own!). However, the world-at-large doesn’t stop being magical or fascinating or often banal because we’ve stopped participating. When we escape from it we’re usually still aware it exists, but as a goldfish is aware—largely unseeing of its aquarium walls, happily swimming and forgetting. Maybe there’s our Transparency with a capital T: “welcome to the future: your own private fishbowl.” 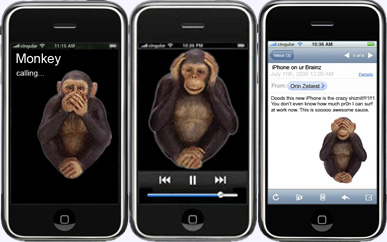 Such mobile devices can complete a triangle: a phone to speak with, music to hear with, and the internet to see with. Somewhere nearby are three wise monkeys avoiding those “evils”. Don’t mistake them as tools of devils, though, as they’re only a human tool—something far more dangerous and wonderful. The problem is that we are neither devils nor angels. Lots of heirloom Utopianism from the 19th century would have us believe otherwise. Ever since the Victorians, there’s been a certain vein running through futurism which is—in a word—vain. The future should be much more *perfect*, says the old saw, than this compromised existence we are forced to live. Too easily, I think, we see technology’s shiny smooth newness and forget how soon it becomes normal, earthly, taken for granted, exploited by some, a boring job to others, and then it’s all old news. That’s why, dear futurists, the iPhone brings us not all that closer to the Singularity. It’s just another thing that we use, that we have, but now it costs only $199.

Which is really what this is all about. It’s about me being tempted to buy the newest and shiniest thing. The iThing. This isn’t about Apple, by the way; it’s about the world. Because here’s the important bit: I don’t mind any of the stranger-alienating, idleness-exterminating, or fishbowl-inhabiting. I don’t find them to be inherently bad. They’re simply facts of life, much as those people on public transit who sometimes happen to be absolutely crazy. I like the idea of choosing whom and what I interact with, instead of just right-place-right-time interactions, and who cares if they take us in the right direction, so long as it’s a step forward. Keep walking to find the way. You’ve heard that all futurists are proven wrong eventually? Enjoy that fact, cause we’re each and every one of us going to be wrong.

Enjoy the renaissance of whatever happens to be momentarily blooming. Daydreams are your friends. Of course, your friends are your friends, too. Remember that the ‘i’ isn’t a pronoun. You’re not alone in life—even if sometimes you want to be. The future is unwritten. At least, that’s what I predict.

2 replies on “The Curse of the Unseeing i”

I’ve got to admit, if I had an iPhone I would totally use it all the time on public transit. Otherwise you end up just looking at other people, trying to pinpoint which vegetable makes that strange smell in Chinatown, wondering if you could pull down that boy’s pants and not get caught…all of which leads to trouble. Yeah, I’d rather poke around on the internet in my hand. I never get on public transit without my gigantor SkullCandy headphones, as it is.

The future is a lot like the past, except now we know more than we did then. Or am I in the present, talking about my past when now was the future. John Prine has a song about this – you know. “We are living in the future, I’ll tell you how I know. I read it in the paper 15 years ago. We’re all riding rocket ships, Talkin with our minds, wearing turquoise jewelry and standin in soups lines. Standin in soup lines.”

This is one of your better commentaries over the years; you are profound and funny and accurate. “…they’re only a human tool—something far more dangerous and wonderful.” Your fascination with being honestly human is something worth capturing… because as we know, you know what writers do.
FLW