This is a city that eats its old. Set them out on the corner, and they’re gone. See something you want? Take it away—it’s yours. If that microwave, or TV, or refrigerator doesn’t have its cord cut that means it still works. Someone doesn’t want it, but wants it off their front curb. It’s a flea market town. You know about trash and treasure, one man and another man? What if that guy lived next door?

I’ve always had this habit. My favorite art assignment: find a box, find some stuff, put the stuff in that box. I dug in the dumpsters behind Target near my college, found a tea-kettle package and broken mirrors and a whole bunch of wire, shone a light through the whole thing. It was real pretty, and appealed to my natural cheapness frugality, also. 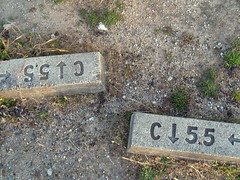 Love of the abandoned, the lost, the free-for-the-taking is what got me through college. And when I say “got me through” I of course mean gave me something to do when I became too frustrated or bored with the school on old Fort Ord, and fell back to the Ord itself. My room was furnished with the 10 year-old leavings of a different institution, the Army, while my classes seemed simultaneously filled with different leavings.

I traveled abroad, and the most consistent fun I could find was exploring the drains of another country, finding little secrets and incidental items, dumpster diving with locals despite what other locals might think. 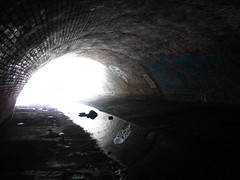 Did you know there’s a drain that leads directly from the rainforest in Airlie Beach, past its campsites, underneath the main highway, and emerges directly on the beach? I miss the Cave Clan, even though I was never a member.

No surprise I should be happy in my new town, one might guess. There’s a Cathedral to tagging right on the waterfront. It’s next to the abandoned bus yard. Art cars, stock metal piled and forged onto them, are here and there. At the moment I’m on top of a street-bedframe, typing on a computer which rests on a street-desk, next to another monitor on top of a piano bench begotten from a yard sale, all for free. We got a chair at that same yard sale, then covered it in cool fabric samples glean’d from Craigslist free. 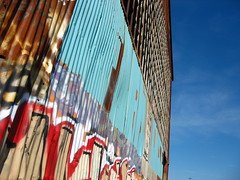 We put it in our sitting room which is filled with some free plants; the urban garden down the street supplies them.

Of course there was the one occasion where, wandering down Haight street, finding a nice (different) piano bench and carrying it off, I was accosted several blocks afterward by a wild-eyed guy saying I took his bench. A little bewildered, I figured out that he’d found it earlier that day and had been trying to sell it ever since. I didn’t pay him the $5 he wanted, even if it was decent furniture. Violates the spirit of the thing.

There’s a lot of free culture, which makes that incident so unusual. More than anywhere else I’ve lived people get it. I’m not looked down on if I desire something cool in a dumpster. Even if I’m in the Financial District, businessman don’t get suspicious when I take their discarded office chair with me. These aren’t company secrets, and that’s why you put this thing out to begin with: so someone else would take it away for you. At the dump they weigh you when you get in and when you get out—if you take as much as you brought, you don’t pay anything. Give me a week and a moving van; I’ll give you an apartment another city-dweller in another city would cry over.

It’s recycling. It’s healthy. It means there’s less waste, what with everybody using everything once and twice and thrice. So what if my cabinet is the same as my neighbors’ before they found another one? A little cannibalism, a little creativity, a good city, can go a long way.