It’s sad that some beautiful things last but a short time. That does mean you don’t have to wait around for them to finish, though.

I like old records. I’ve pontificated at length before. This particular wonderful ol’ dusty gem is an ephemeral release designed to promote—of all the things to promote on a record—a new way of recording records. Yes, it is a Demonstration Record for Phase 4 Stereo. That’s it’s name, pretty much. Inside the folding cover there’s a lengthy explanation as to what “Phase 4 Stereo” is, and how it differs from the previous three phases. It goes on and on about how great the Phase 4 is, and the compilers seemed to have gone out of their way to find music that’s dynamic and at times dare-I-say-it “zany.” However, I choose to keep this explanation brief; partly because it fits the title and partly because the record itself isn’t that long (all of 25 minutes : 38 seconds). Moving on: samples!

You Are My Lucky Star

Pretty neat, if you ask me. But you might be asking: Why the demonstration? Why now? That Winterhalter nonsense he blogged about last month was justified for four paragraphs before a name even got dropped… Well, there is good reason. Two days ago a little late Christmas present slipped through and I’m now the proud owner of a pristinely aftermarket Zoom H2 Handy Recorder. The thing is simple, and amazing, and simply amazing. If I could leave that as my review I would. But as a sort of placeholder—and a fine demonstration of it’s ease of use—here are the 10 tracks from this ephemeral and exotic throwback sensation beautifully presented in convenient downloadable ID3-tagged MP3 (all recorded, transferred, cleaned up, and encoded in little more than an hour). 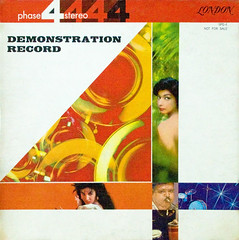 3 replies on “A Brief Demonstration”

That STEREO… it’s such a modern thing. This is cool, and a throwback, and fun. The sound quality is awesome. Looking for more where that came from.

I have always been a Phase 4 Stereo fan since the late 1960s. Please share with us any of those albums if you have them in MP3 or any digitalized form, anyone? Thank you.

Fantastic! What a brilliant find.
I used to have this album as a boy, and loved it to bits. I haven’t heard it for 30 years or more, and you’ve given me a wonderful stroll down memory lane. Thank you so very much.
All bets wishes to you,
Jon